From The Runner's Path
"Sprained head, here I come."
Just starting to write this hurts...

It appears that I'm running toward something that looks a lot like a concrete wall.

I know that I can make a choice between options of avoidance.
They are all variations of stopping and changing direction, and their combinations thereof.
As long as I remain focused on the solid mass which is the assembly of aggregate pebbles, ground limestone mortar, and a heavy modicum of reinforcing steel bars - there's a headache - dead ahead.

But then, I hook a left:
Suddenly I am at the mercy of 2-dimensional thinking.
Length. Times. Width.
The length of the wall, and how far I have to go to regain my heading becomes a significant variable - in minutes.

Ther's a MULTIVERSE out there!
Or, I could just ignore the wall. In an alternate reality it does not even exist. Runners run through it on a regular basis. Writers call it a "block" and bombard it with words. A mime would just create a door. 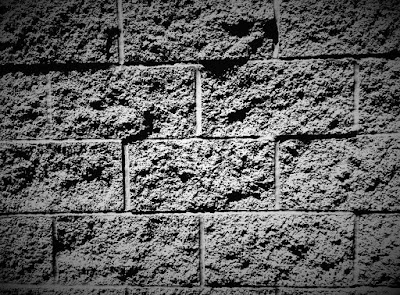 Posted by Brother Tomasso at 2:56 PM No comments: