What? It could work! 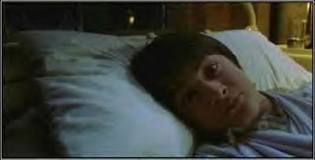 Josh Brolin plays The Presidential Candidate and Daniel Radcliffe plays the troubled amnesiac who's come out an eleven year coma to find he has magic powers and becomes obsessed with heading off a future Armageddon.
ACT I

SNAP FROM BLACK: It's eleven years ago. Open on a car speeding along rain swamped rural highway, after dark. It's a harrowing ride. Way too fast for conditions  CUT TO: interior of the car showing a young boy, about ten years old, lying unconscious in the back seat with his head being cradled in the lap of an unidentified woman; presumed to be his mother. There is a deep gash in the boy's forehead. CUT TO: her perspective past the back of the driver's head out the windshield showing headlights reflecting off sheets of rain and glimpses of rapidly passing foliage at the side of the road, but little else. Are those the oncoming lights of a truck too close to avoid?  CUT TO: Extreme closeup of the terror in the drivers eyes.

There is a scream. Then silence. Then BLACK

FADE FROM BLACK: A closeup of the sleeping boy's face slowly morphs showing the passage of years.
During the change, we hear snippets of conversation as though coming in and out of a sonic cloud: "...how sad it is that his parents died in the crash..." "...a miracle the boy lived..." "...the fact he was already unconscious when the accident happened probably saved his life...." ...an old man's voice accepting responsibility of the boy's care... ...the same elderly voice singing Happy Birthday... " ...why won't he wake up?..." "...we can't find anything wrong..." "...it's all up to him now..." " ...sounds of a TV progressing through a decade of news and events... ... etc.

Then silence.  Then WHITE

FADE FROM WHITE: View from an upstairs window out to a shady well manicured residential back yard. It's a beautiful late summer's day. Pulling back reveals an adult version of the sleeping boy: Jimmy Smith (Daniel Radcliffe). Long steady-cam panning shot takes in the surroundings: A typical farmhouse interior shows pictures hung on the wall showing his life as a boy with his parents. In some of the pictures we can see an older bearded man with his arm around Jimmy's mother. There's a well broken in easy chair beside his bed with a pile of books next to it. The topmost one: Harry Potter and the Deathly Hallows has a bookmark not quite half way through it. We hear the television in another room and The Candidate (Josh Brolin) is making a speech at a large rally. Through the sonic cloud we can hear the crowd roar its approval on almost each line he utters. He is a phenomenon. As this happens the tracking shot has now found Jimmy's face again and begins a slow zoom in towards it.

CUT TO TV: SLOW ZOOM to  The Candidate saying:
"My friends, I have been watching and I have been praying for God to tell me what to do about the threat we are facing as a Nation when it comes to how our OWN GOVERNMENT has begun to take over our lives. And do you know what he said?"
The crowd shouts "YES!" in unison.
"He said, 'Man'," the crowd cheers, "He said 'Man, you gotta take this one on yourself.'"
The crowd shouts "YES!"
"He said, 'You gotta take this one on yourself because there just in't gonna be anyone gonna do it for you.'"
Scattered "That's right's" and "Amens" can be heard from the crowd.
"He said, 'Rick,'"
The crowd shouts "YES!"
"You gotta run for President of the United States and you gotta WIN! Because I'm FED UP!"
The crowd shouts "FED UP!"  "He said 'I'm FED UP with this government, and you gotta do something about it!'"
We are now zoomed in on  The Candidate 's eyes showing the naked ambition in them. As the crowd goes wild...

CUT TO CLOSE UP: Jimmy Smith,
the sonic "clouds" part and the sound becomes crystal clear. Jimmy's eyes snap open. He is awake.

Posted by Brother Tomasso at 4:52 PM No comments:

By Barley Corne
~ With apologies to Robert Frost

SOMETHING there is that doesn't love a scone,
That dreads the gritty dry-mouth taste of it,
And sends the gasping sampler on the run;
A nonfat mocha latte for relief.


The toasted bagel smacks of issue too:
The cream cheese is a needed condiment
And my physician wants me to reduce,
And he would have me using fat free spread,

The flavoring is flat no pleasure there.
So what would be the pastry I prefer? 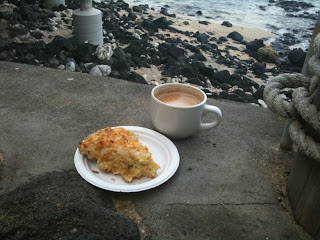 Confections, I would order, were I free.
And with my neighbor I can gladly share;

A lovely cupcake, frosted.  Even glazed,
And sip a sweetened latte for the prize
Of friendship, as we speak of daily news.
The sugar in our veins begins to drive

Our heartbeats to a quicker stronger pace,
The other customers who can observe
Remark of frosting smeared about our mouths.
The room with sucrose aided sight does glow

It seems the world itself has been refueled
And smiling, shaking hands as we depart,
Perhaps a friendly hug to seal the day;
We only have to keep a secret pact:
To not divulge the content of our snack
We both agree, "Good cupcakes make good neighbors."

Posted by Brother Tomasso at 2:38 PM No comments:

"The Student"
- From Candle Light
The Old Man awoke to a new day and a new sound.
For him, sleeping had become more of a habit in recent years. When he was younger, he recalled, days would pass while he was in alignment in which he did not require the sleeping state. This was not to say that meditation was not needed. When one is in alignment, much can be accomplished with well chosen posts in the arcs of day and night; posts to achieve the meditative condition. Differing from sleep - when one loses consciousness - the meditative provides a markedly sharper awareness of ones surroundings.

Email ThisBlogThis!Share to TwitterShare to FacebookShare to Pinterest
Labels: The Student

"Preparations"
- From Candle Light
The cycle continued.
Still air cooled in the gathering dusk.  The valley floor was already steeped in evening-tide, receiving a fresh misting of dew.  While on the gentle slopes above, ridge-row trees stood flocked with liquid gold as the sun dipped below an unseen horizon.  Inexorably, yet more swiftly than one would imagine, that shimmering aura slipped upward until the topmost leaves of the highest trees could no longer hold the day.
There was, for a moment, a sparkling silence: A complete absence of sound.

In that moment, when the entire earth was still, an Old Man - a Teacher – produced a small lacquered box from the truck sack that was perpetually slung over his shoulder.  Sliding open its top, he withdrew one single match, then carefully closed the lid and replaced the box in his pouch.  Crossing to a special river stone prepared especially for this one task, he ignited the phosphor and touched it to the wick of a large candle.  He considered his action for a time, as he did for every action he took, holding the flame to the wick to make sure it was well lit.  This duty done, he removed the match and extinguished it in a small bowl of white sand.  Then he turned to face up the valley and watched as one by one, other camps scattered about the surrounding hills winked into illumination as their inhabitants, too, lighted their lamps in like manner to add their glow to the approaching night.
A cricket sang.  A nightingale joined in chorus.  The residents of the nearby river struck a frog-like chord and a twilight overture began.  It was a prelude; one that promised to swell to symphonic proportions as the evening progressed.
He set about his preparations. First was his evening meal.
His diet, half by necessity and half by choice, had evolved from a meat dense youthful voraciousness towards one laced only sparsely with once motive proteins.  The volume of his repast was now those vegetative offerings from the well-tended community fields in the terraces by the river.  The river, its waterfall, and the mountain spring that spawned them never quite dried, even in the worst of summer heat.  Tonight’s bill of fare was to be one of green legumes and sweet yellow tubers.  Neither were attention critical to prepare, and it would not diminish their nutritional value significantly if he did not consume them immediately.
There were other preparations to make this evening.
The Old Man knew there were visitors coming to the valley.  One was a student.  One was a seeker.  And there were more to follow behind them who would decide the outcome of a storm.  It was not the weather that concerned him - it was the why.
Posted by Brother Tomasso at 9:04 AM No comments:

Email ThisBlogThis!Share to TwitterShare to FacebookShare to Pinterest
Labels: Preparations


"The Coin"
- From Candle Light

The Old Man held a coin in the air, letting its gleam fall across the boy's eager eyes.  "What does this mean to you?" he asked?"
"Why, Teacher," began the lad, "it's a coin.  One uses it to buy things."
"Exactly," said the Old Man.  "What manner of thing can it buy?"
The boy answered, "With enough of them, it can buy anything, everything!"
"Can it be used to do good?"
"Oh, yes!  It certainly can." 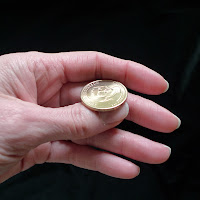 "Evil?"
"Yes Teacher, it can be used for that in the wrong hands."
"Then, we have discovered that one coin can be used for either good or evil...the same coin...the only difference is by whom it is used."  The old one tossed the coin in the air, flinging it with his thumb so that it turned rapidly over and over.  A ringing like a small bell reverberated through the valley.
"Imagine that this coin is named TRUTH: one side of it represents good, the other side represents evil.  Which side would you pick?"
"The good side, of course," offered the boy, puffing up his chest as if to say, “I know the right answer to THAT question!”
The coin landed on the soft ground.  Its ringing fell silent.
"Look at the coin," instructed the Teacher, "which side is showing?"
The boy didn't answer.  He had no way to tell which was which.
The Old Man laughed at the confused expression on the young boy’s face, "Don't worry, Caleb!  It's the good side - because you are the one who chose it."

Posted by Brother Tomasso at 10:12 PM No comments: