Yes, Abigael, it WILL all be over soon.

For those of you who are not one of the 1.6 million viewers of a YouTube video starring a 4-year-old Colorado girl named Abigael Evans, who awww'd us all with her tearful lament that she was "Tired of [the coverage of] 'Bronco Bama' and Mitt Romney" on National Public Radio - here's what you missed:


Her mother is heard on the video to be attempting to console the child by telling her that the election will be over soon. It calms her a little.

The Times goes on to say that NPR also sent the girl an NPR politics pin, which, according to a reporter from NPR station KUNC, seems to have cheered the girl up tremendously.


I suppose, in that sentiment, we can all take solace.

It feels as though it has been a lifetime since April 21, 2011 when Gary Johnson announced - on Twitter no less - "I am running for president." He was the first to declare and the fourth to eventually leave what was to become a field of twelve Republican candidates writhing their way toward the GOP convention more than a year and a half later. For the record, the rest of the names were - in order of their entry into the race - Cain, Gingrich, Paul and Pawlenty; Romney, Santorum, Bachmann and Huntsman; McCotter, Perry and Roemer. Some fell quickly. Others were tripped up later. Before reaching the Convention at Tampa, all but Paul and Romney had fallen along the road.

After 478 days of campaigning for the GOP nomination for President of the United States, two men entered "Tampa-Dome". One man left: Willard Mitt Romney.

478 Days!  And that was only to the Republican Convention.  There was still nearly 3 months to go before election day.  All in all, 565 days will have been spent literally brawling for the chance to go up against "Bronco Bama" for President.  That's almost half the time poor Abby's been here on this planet!

I haven't even mentioned how much time Mr. Obama has had to take away from his duties as the leader of the free world to meet the challenge brought by the opposition, and keep his job.

(And thank you SCOTUS for making it even more like blood-sport by adding that little wrinkle of the so-called "Citizen's United" decision.  You just couldn't leave bad enough alone without adding UNLIMITED corporate funding to the election stew.  As if we, living our shabby little lives, needed more incentive to believe we were completely impotent in the ability control our own political destiny.  That the government of the People, by the People, and for the People survives only because its it's the Corporations who are the People.)

Anyway - yes, Abigael, it will all be over soon. Next Tuesday is Election Day and that's when the counting begins.

Of course when, the counting will end is anyone's guess at the moment. Both camps are lawyering up rather heavily. Something akin to the Y2K Bush v. Gore mishegoss could happen again this year if the legal eagles have anything to say about it. But that's another very long story...

All we can do is all we can do. Turn out. Bring your ID with you even if you don't think it's necessary. Pull the lever. Fill in the dot. Touch the screen. Punch the chad - all the way through!  Vote!  Get 'er done!

And when it's all over, and Abby can listen to her programs again, by the time she's six the whole thing starts all over again. 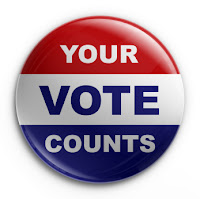 Posted by Brother Tomasso at 3:31 PM