This document is a production radio script for a segment of "Barley Corne’s Hour Of Wasted Time" (alternately spelled: Thyme), broadcast over the National Broadcasting Network on the evening of June 14, 1949. The popular radio show which, on this occasion, was filmed by an NBN Television crew for an experimental broadcast, was briefly interrupted by interference from an unidentified source and the visual record of certain segments, including this episode of the popular Jack Noir: Time Cracker series,  did not survive.


(Editor’s note: “Barley Corne’s Hour of Wasted Time [Thyme]” was performed between 1943 and 1958 in front of a live audience on a theatrical stage in upstate New Amsterdam.) 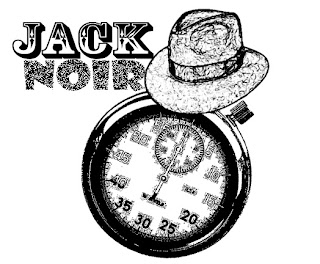 Announcer:
If it’s after 6:30 on Tuesday, then it’s TIME!  Time for Jack Noir: Time Cracker…
{SFX: alarm clock}
(continues)…Episode 24.
{ SFX: Theme music plays under}
Last week, when we left Jack, he and his stately and beautiful assistant Nathalie had wandered aimlessly into the Wilderness Bar and Grill in South Hollywood.  Nathalie was deciding between the Cobb Salad, and a Chicken with Wine Sauce and Onions.
{ SFX: restaurant sounds}
Nathalie
I – I guess I’ll have the salad.
Jack
No.  Wait.  I don’t think you should do that…
Nathalie
Why not?  The Cobb Salad is good here…
Jack
You should have the chicken.
Nathalie
I want the Cobb Salad…
Jack
You should have the chicken.
Nathalie
Jack, I don’t think I want the chicken?
Jack
Just…order the chicken
Nathalie
Jack, why should I have the chicken?
Jack
Because the Cobb Salad has eggs in it….
Nathalie
Jack, I know that…
Jack
(not understanding why she doesn’t understand)
Chicken…(pause)… eggs.
Nathalie
Jack…
Jack
I think I know which came first…
Nathalie
No one knows that…
Jack
I think I know.

Nathalie
Jack!  It’s…Raton!
Jack
I can smell him Nathalie even though he’s hiding beneath that giant stuffed mushroom cap.

Raton
That’s right, Mr…Noir.  You have an extraordinarily good sense of smell don’t you?

Jack
It’s easy to sniff out a rat on this menu.
Raton
(Emerging from under the mushroom cap)
You’ve never really acquired the taste for my kind, have you Mr. Noir?

Jack
As long as you have to bring it up.  No, I’m still looking.  And…

Raton
How long have you been looking for it Mr.  Noir?  It seems like you’ve had plenty of…TIME.

{ SFX: Dramatic music Sting}
Nathalie
Jack, be careful.  He has the stopwatch!
Raton
That’s right Mr. Noir.  I’m holding your stopwatch.  The one you lost in episode 17.  You thought it was gone forever didn’t you?
Jack
(trying to get the upper hand)
That depends on which forever you mean.
Raton
What?
Jack
Come on, you’ve been stuck in this recipe for a while.  You tell me, Raton.  Which forever do you mean?
Nathalie
Jack!  Be careful.  You’re going to send us into a flashback.

Jack
I’ve lived my whole life in a flashback, Sweetcakes.  What’s to stop me now?

Nathalie
I have a feeling this one’s going to be different.

Jack
What?  But, they’re never different.  They’re always the same.  That’s what makes them flashbacks!  They’re a literary, theatrical or cinematic device in which an earlier event is inserted into the normal chronological order of a narrative.  They tell you what happened before!

Nathalie
But… you’ve never called me “Sweetcakes” before.
{ SFX: Dramatic music Sting}
Jack
Ah hah!  But, you can’t know that unless you’ve been in this flashback already!

Nathalie
We’re not in the flashback yet.
Jack
We’re not?
Nathalie
Have you heard the organ music playing us into the past, yet?

Jack
No.
Nathalie (voice fading)
Has anyone faded their voice out as though they’re walking down a long corridor?

Jack
I don’t think so.
Chief Casey (a completely different voice)
Has anyone completely new to the story up to this point started talking as though he’s been here all the time? Actually he doesn’t appear until the end of the episode?

Jack
Not until now.
Nathalie
Then we’re not in a flashback yet.  Are we?
Jack
(mysteriously)
I don’t …know.
Waitress
Okay, who had the ribs?
Nathalie
I did.
Jack
Nathalie, that’s not what you ordered…
Nathalie
Yes it is.  I ordered the chocolate ribs with a Foccacia sauce and stewed tomatoes.

Jack
(As if remembering)
And I …I had the Hot Set Ralston with a bowl of Suet….Now, wait just a minute… Hold on!  That’s what I ordered in Episode 17, just before that vermin Raton stole my stopwatch!

Raton
That’s right Mr. Noir.  I have your stopwatch.  And I’m not afraid to use it! (He breaks into maniacal laughter)
{ SFX: A stopwatch starts ticking and continues through the next section }

Chief Casey:
We’ll be back after these words from Barley Corne’s Sourmash Sweetcakes and your local stations.

Jack
(talking into a coffee mug to make his voice “do that voice-over narration thing”)
Nathalie and I leapt from the car and started sprinting down Wasilla Boulevard to South Hollywood  We only had a minute or so to get to the Wilderness Bar and Grill before Nathalie and I would wander aimlessly in as we did at the end of Episode 23…which is where we rejoined the story in this episode….
Announcer:
Jack Noir: Episode 24

Jack
(into the cup)  Exactly…
Nathalie
(out of breath as though she was running)  You know I can hear you when you do that, don’t you?
Jack
(normal voice, now breathing heavily as well) Yes, but it’s essential as a device to bring the listener up to speed about where we are in the story.  A classical element brought in from the Greek Theatre.  A Coffee Mug Chorus if you will.  It allows a character to step out of his body, as it were, and to narrate the story from a second or third person perspective.

Nathalie
Just as long as you know.  ….

Nathalie
Jack…we’re about to catch up with our earlier selves, do something!

Jack
I told you!  I know now which came first!
Nathalie
The Cobb Salad?
Jack
No!  The EGG!

{SFX:  sound of a struggle… dishes and silverware hitting the floor}

{SFX:  sounds of surprised patrons in the restaurant as if they’ve seen a rat on the premises.  This keeps up as a background throughout the rest of the episode.}

Raton
(startled, out of breath, exposed) Well, Mr…Noir.  I don’t know how you did it, but it seems you’ve spoiled my little surprise.
Jack
That’s not all that’s spoiled Raton.  I’ve figured out the sequence.

Raton
What sequence?
Jack
The special ingredient…
Raton
You found it?
Jack
You bet I did.  See I take this egg here.  Crack it open and out pops…

{SFX: Loud popping sound}
Nathalie
Chief Casey?
Chief Casey
(Irish accent of course)  So, Mr. Raton.  It’s no good again ye’ve been up ta?  You’ll be comin’ along with me, then.

{SFX:  Hand cuffling sounds}
Raton
You can’t take me that easily copper.  I still have the …. Why…What happened to the stopwatch?  I had it right here in my pocket at the beginning of the episode.

Jack
Are you looking for this Raton?
{SFX:  Jack pulls watch and chain out of his pocket.}

Raton
Mon dieu!…Noir!  It is impossible… how did you? … But I stole it from you seven episodes ago.
Chief Casey
Is that a crime I just heard you confessin’ to?  It’s your touch you’re losing, sure.

Jack
It was easy, Raton.  While we were hurrying here to intercept our earlier selves from episode 23, I remembered a little trick I learned back in the original series.  All I have to do is dis-remember some element of my past.  Re-remember it into a different future.   And voila!

{SFX: Ticking resumes and gets louder throughout next sequence, morphing from that of a small stopwatch to something like Big Ben}

Casey and Raton
“Voila,” what?
Jack
Once I dis-remembered the exact moment you stole my watch from me in episode 17, I grabbed it back in my new reality.  Since Episode 18, you haven’t had the stopwatch.  I have!

Raton
But then I wouldn’t have been able to steal the secret of the tanning beds in Episode 20… oh, no!  I feel so pasty!
Nathalie
Jack…what’s happening?
Jack
The past is reshuffling around us, Nathalie.  Hold on!  We just have to ride it out…

Nathalie
Jack…this IS Episode 24!
Jack
Not anymore, Sweet cakes.  We could land just about anywhere in this series.

Chief Casey
(Now he has a New York accent) Or next, the way I figure…

Nathalie
Casey, what happened to your accent?
Chief Casey
What accent?
Jack
He’s right.  We could be thrown completely clear of this series and into another whole season.  Or…
{SFX:  Big Ben starts to toll midnight}

Nathalie
(nervously)  Or what?
Jack
Or, we could be cancelled completely.
Nathalie
Jack I’m scared.
Jack
Just hang on!
Raton
Noir!  You can’t dis-remember me!
Jack
Sorry Raton.  It’s not up to me now.  I all has to shuffle out

{SFX: normal restaurant sounds }
Waitress
Cobb salad.  No eggs.  Wonderful choice, miss.  And what will the Gentleman have?

Chief Casey
You got burgers?
Nathalie
(sadly) Oh, Jack….
{SFX:  Theme music up… a little more mournful than before…}

Announcer:
(Raton’s voice with no accent)
Is this the LAST episode of Jack Noir: Time Cracker?  Or the first?  What happened to the Stopwatch?  How can anyone  know?  What have you been listening to for 24 episodes?  And what about Nathalie?  Tune in next week and find out.  Maybe.

Posted by Brother Tomasso at 3:27 PM